Oscar nominated for Best Documentary “On Any Sunday” is by far the greatest motorcycle film ever made. Before its release in 1971, motorcycling was always portrayed by Hollywood as a bunch of renegade hoodlums on choppers, causing problems wherever they went.

Coming off the heels of the worldwide success of “The Endless Summer,” the groundbreaking film about the evolving surf culture of the 60s, director Bruce Brown set out to change the perception of motorcycling with the release of On Any Sunday. Brown was determined to capture the sport of motorcycling from his own unique perspective and lens. Along with his friends Steve McQueen, Malcolm Smith, and Mert Lawwill, Brown directed his camera at the action while focusing on the various disciplines of motorcycle racing and, most importantly to Bruce, the people and the community shaping it. From Mert Lawwill’s attempt to regain his Grand National #1 plate in dirt track and road racing, to Steve McQueen’s real-life weekend warrior racing in the desert and at the famed Elsinore Grand Prix, to Malcolm Smith’s other-worldly skills around the world at the International Six Days Trial, Baja racing, hillclimbing and trials.

50 years later, Bruce Brown Films now pays tribute to honor the entire motorcycle community by presenting the re-mastered and digitally enhanced 50th Anniversary On Any Sunday edition. This newly released masterpiece brings the audience a new experience to enjoy with friends and family! From color correction and image restoration to stunning PCM 5.1 surround sound of the original audio and soundtrack, this new movie relives the 70s like never before. 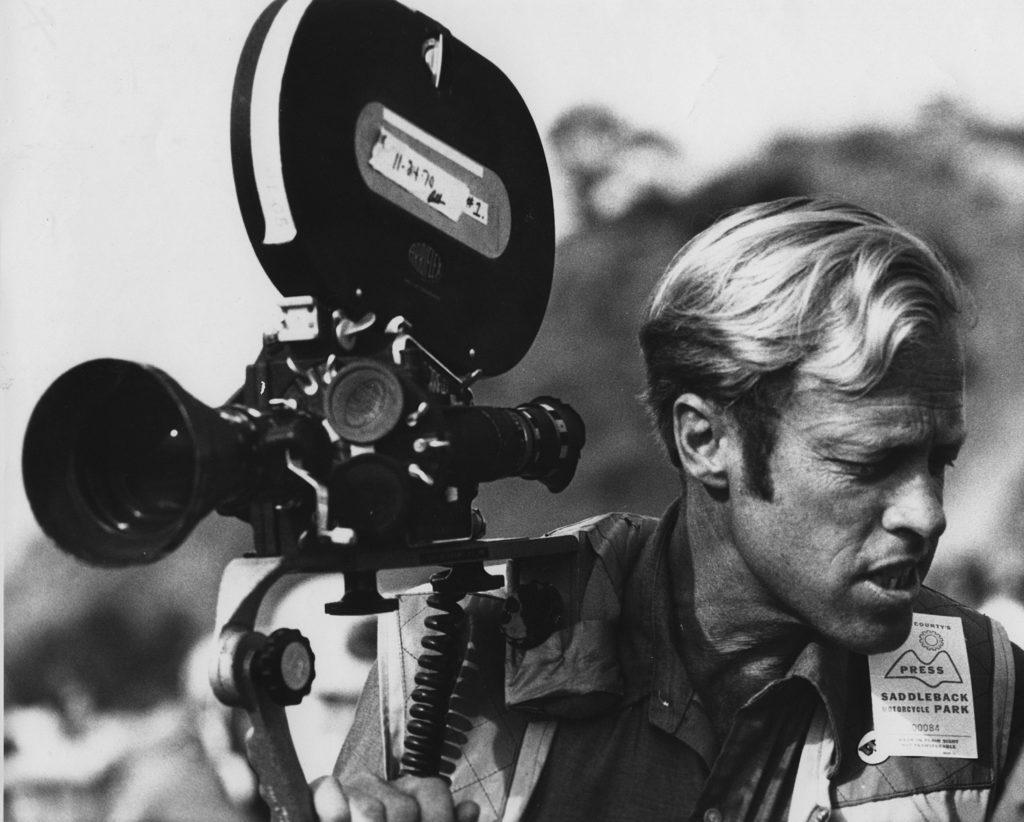 50 years later, Bruce Brown Films now pays tribute to honor the entire motorcycle community by presenting the re-mastered and digitally enhanced 50th Anniversary On Any Sunday edition. This newly released masterpiece brings the audience a new experience to enjoy with friends and family! From color correction and image restoration to stunning PCM 5.1 surround sound of the original audio and soundtrack, this new movie relives the 70s like never before.

In a world of YouTube, X-Games, and GoPro’s, the film still resonates with people of all ages because it’s about the stories, the action, and that humble, funny, and captivating voice of Bruce Brown.

Though we lost Bruce Brown in 2017, his legacy lives on with this new version of On Any Sunday that is ready to be enjoyed by new generations who have never seen it on the big screen. Bruce wouldn’t have it any other way.

…and the hundreds of other fearless riders included.

"You guys are nuts.”

Calvin Trillin is a man with an interesting job. He wanders all over the United States for the New Yorker magazine and files dispatches about what our fellow Americans are up to in Duluth, Altoona, Cincinnati, and all the Holiday Inns and Howard Johnson’s in between. At one time or another he has studied the life styles of Paul Anderson (world’s champion weight lifter) and Fats Cohen (world’s champion pizza eater, until a recent diet).

During spring vacation this year, he wandered down to Fort Lauderdale and Daytona Beach to check out the life styles of the college students who annually migrate there. In the course of his investigation he asked himself, he says, whether the time had actually come when one felt nostalgia at the sight of a Phi Delta Theta sweatshirt?

Like a lot of good observations, that one uses very few words to imply an entire state of mind. The whole world of the late 1950s and early 1960s (when Trillin doubtless saw many such sweatshirts, as well as garments bearing the emblem of the Betas, the Sigma Chis and so on) is supposed to have been rendered obsolete by the plague of war, assassination and social misery that has descended on us since.

And yet, if we can buy the Big Band Sound from Time-Life records and pick up reprints of old Liberty magazines at the newsstand, is it not permitted to feel nostalgic for the slightly more recent past of rush weeks, exchanges, pledge classes, chapter meetings? Just the other day, I saw a girl wearing a fraternity pin on her sweater, and the whole big 1960 thing about fraternity pins (and sweaters) came rushing back to me.

I mention this only because you will probably not fully appreciate Bruce Brown’s “On Any Sunday” unless such a sight brings memories rushing back to you. Brown’s movies are charming, infectious, clean-cut, and, enthusiastic as only a Rush Chairman could be enthusiastic, leading a line of jogging Actives down the steps of the House to shake hands with potential Pledges wearing new sport jackets and wing-tip shoes. That is why they are so much fun to see. They come from a world of innocence and simple physical pleasures.

Brown’s first film, which made him a great deal of money, was “The Endless Summer.” He took a 16-mm. camera and a crew of two on a trip around the world in search of something that was perhaps not of earthshaking significance, but wouldn’t bite you when you found it: The perfect wave. Along the way, he visited a great many waves that were imperfect for one reason or another, and we saw a lot of sun, sand, healthy bodies and spectacular surfing feats.

The instrument weaving all those waves and surfboards together into an enjoyable movie was the Brown voice which is youthful, unaffected and genuinely enthusiastic. “Boy! That was a big one,” he said about any number of waves, and the way he said it somehow made us agree that it sure was. Now he has made “On Any Sunday,” which does for motorcycle racing what “The Endless Summer” did for surfing and it’s enjoyable in exactly the same way.

You and I know that professional motorcycle racers must be a daring, violent and occasionally dangerous lot. But Brown sees them as basically having fun, and when we got a close-up of a national champion who has just completed a six-day race through rugged country terrain, Brown is likely to say: “Here he is now, still wearing that ear-to-ear grin.” And so he is.

A lot more art goes into a film like “On Any Sunday” that might be apparent. It’s tremendously hard to get the footage, first of all; a surfer on a wave operates within a relatively small area, but a two-mile motorcycle race requires thousands of feet of footage from several cameras to be adequately covered. Brown has somehow accomplished this (with some financial backing from Steve McQueen, who turns up in the movie a couple of times). What’s better, having done it he doesn’t tell us about it.

Despite the work that went into his film, and despite the desperately difficult experiences that professional motorcycle racers endure, he somehow makes the whole thing seem informal, casual, relaxed. There is still some tension there, but it’s masked by that ear-to-ear grin, like the night luring rush week when you didn’t have to wear a tie because the Interfraternity Council had decreed a cookout.

Some men hunt the great white shark. Some men join roller derbies, while others go to the moon. Some men like to knit. Some are freefall parachutists. Some spend their lives searching for the perfect woman or the perfect movie or the perfect wave. With the possible exception of knitting, all of these endeavors involve an element of risk, either physical or psychological, to such an extent that the attainment of the end becomes less important than the excitation provided by the pursuit itself.

Five years ago Bruce Brown recorded one, round-the-world search for the perfect wave in “The Endless Summer,” which was a very beautiful movie to look at (especially from the relative safety of a cloudy smoking section) and—I’ve now come to think—much less simple-minded than it originally sounded. On the basis of his new film, “On Any Sunday,” a feature-length documentary about motorcycles and the men who ride them in apparent pleasurable competition, Brown stands in way of becoming the unofficial poet of the sports world. He not only records and shares with us the often extraordinary physical sensations experienced by the cyclists, but he also manages to suggest, in the absolutely flat language of the nonverbal participants, that the joy of the sport may also be the mask that hides a curse.

Like clean-cut, monosyllabic Flying Dutchmen, Mert Lawwill and Malcolm Smith, the professional cyclists whose exploits Brown follows through the film, lead lives of enchanted circularity: the winning of one event is not as much a goal as the preface to still another competition, and another after that. The monetary rewards are never great and, often enough, the prizes are simply trophies. At the end of one race in which death might not have been too far removed, Brown, as his own narrator, is likely to say with his unerring knack for the anticlimactic comment: “There stands Malcolm with a big grin.”Malcolm himself is likely to say: “That was really neat”.

It is not as silly as it sounds because the shape of the lives recorded by Brown are almost necessarily anticlimactic; that is, until someone gets hurt or (off-screen) killed. The movie itself is anything but anticlimactic. By putting his cameras on the cycles, Brown achieves audience-participation effects with speed that amount to marvelous delirium. The camera work is fancy, but it’s a fanciness for a specific purpose, and “On Any Sunday” is the first film I can remember in months in which I thoroughly enjoyed the slow-motion, the zooms, the helicopter shots, the superimpositions and all those other techniques that are the tired rhetoric of the narrative cinema. There is, I suspect, no other way by which to communicate the sense of the intoxication that is the real goal of the cyclists, and that can only be realized through the intensification of all the perceptions.

Brown records just about every kind of cycling competition there is, going from southern California to Spain and back again, catching drivers who insist on racing with broken legs, broken noses, and, in one instance, with a back broken six weeks before in an especially hazardous competition. “What kind of men are these?” Brown asks, and the answer comes not from what anyone says, but from the crazy, sensational motion of the film, which is, I feel, in its own way, a remarkable adventure, as simple and as unique to film as the picturization of movement.”On Any Sunday” which opened yesterday at the Murray Hill, was, I understand, financed by Steve McQueen, who also shows up in the film from time to time as the very creditable cyclist he is.

On Any Sunday…40th Anniversary. Cycle World sits down with Bruce Brown and all the stars of the film for an in-depth story about the making of the film in the January 2012 issue.

Lifechanging. That’s how generations of riders have described the original On Any Sunday. Bruce Brown’s 1971 feature was a revelation, opening a door to the world of motorcycle racing and sharing the heart, drive and inspiration of what he calls “a great brotherhood of people” united in their passion for riding on two wheels. In this clip, personalities from On Any Sunday The Next Chapter — pros like Carlin Dunne, Robbie Maddison, Kendall Norman, Roland Sands and Ricky Johnson and fans including Transworld Motocross editor Donn Maeda and skier Daron Rahlves — look back at how the original movie touched their lives and energized the sport. For more info on On Any Sunday, The Next Chapter visit OnAnySundayFilm.com

Please contact Pipeline Digital Media by filling out the form below.